These articles appeared in the Toronto Sun and Etobicoke Guardian after we returned home:

We stood on the very ground where so many Canadians just like us lost their lives. Not much older than us when they fought in the first world war, in what turned out to be Canada’s greatest ever military victory.

We were there as part of the “Exercise Canadian Invasion 2017” with the 142 Mimico ‘Determination’ Squadron Royal Canadian Air Cadets, joined by Air Cadets from 2 VandenBos Whitby Squadron, 246 Canadian Progress Squadron and the 272 Ojibwa Royal Canadian Sea Cadets in a tour through Belgium and France.

In the previous days leading up to Vimy, we toured war sites and monuments where boys like us lost their lives as young as 17. Juno Beach was one of first stops, such a beautiful beach. Tough to imagine what it looked like during the war. In Dieppe, you could still see bullet holes in the walls in the buildings. We walked through the grave sites of the Canadian War Cemetery in Dieppe and the Beny-Sur-Mer Canadian War Cemetery, witnessing the rows and rows of lost Canadians. You can read numbers of soldiers lost, but seeing that many headstones laid out was a total different thing. Even pictures, and movies don’t do it justice.

One of our fellow Cadets found the grave of a family member at Beny-sur-Mer. He was the first person from his family to say goodbye since he died in 1944, trying to save another soldier.

The trenches, tunnels and bunkers, the countryside is still full of holes that bare the markings of a brutal war. Some of the land is still unsafe because they haven’t cleared metal shrapnel, bombs, mines and explosives yet, still buried under the grass.

Dressed in full dress uniform, we marched to Canada’s monument at Vimy. We were amazed by the size, and the pure white against a dark overcast sky. We stood at attention at the monument, and the surprise that provided the highlight of the trip when they called our names for promotion.

There’s no way to explain how we felt standing on the Vimy Memorial, let alone being honoured by the Commanding Officer with a promotion, here on this hallowed ground. Some of us were honoured with a promotion, as we were promoted to Flight Corporal, others with service medals from the Cadet program. Whatever rank we achieve at the end of our Cadet career, this one will be the one we will remember the most. One of our proudest moments as part of the Air Cadet program.

It was a huge honour to have a promotion on Vimy Ridge where Canadians fought years ago. We toured the trenches from both the Allies and enemy. The trenches had a wooden floor that looked like a ladder, We saw where the gunners would shoot from with a thick metal wall with a little hole to shoot out of. We went in the tunnels under the trenches, we couldn’t stand up straight in the tunnels because of the low ceiling. They are designed more for use than comfort. We couldn’t imagine what it would be like to hear the enemy talking just a couple feet over their heads and knowing that if you make a noise that they could hear you too and put your whole mission in danger.

And now, back in Canada, we now know more about the sacrifice that Canadian solders made for each of us during the war, and just how bad the war was. We learned so much on the trip and had no idea how big some of the monuments were going to be, or how the war changed the land to the extent that it did. We are so glad that we could go to Vimy and honour 3600+ Canadians who died there and 10’s of thousands of courageous soldiers who defeated the German army to win the battle of Vimy 100 years ago. We may only be 15, but it wasn’t lost on us. 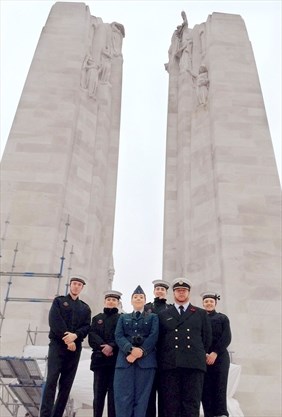 A group of Etobicoke cadets spent their March break walking in the footsteps of Canada’s fallen heroes during a 10-day trip touring the battlefields and cemeteries of France and Belgium.

Thirty-three members of the Royal Canadian Sea Cadet Corps Ojibwa and Air Cadets of the 142 Mimico Determination Squadron spent March 12 to March 21 touring a “jam-packed” itinerary of locations of historical significance to both the First and Second World Wars — including Vimy Ridge, Dieppe, Passchendaele and Juno Beach, among many others.

“I think they were all pretty astonished standing there on some of those sites. The cadets were in awe,” said Sweeney, who accompanied the cadets on the trip as chaperone, along with Capt. Anastacia Scannell.

“It would be really noisy on the bus on the way to some of these places, but very quiet leaving. You could hear a pin drop on the bus, so you could tell they were reflecting and thinking about what they learned — and just the fact that they were there seeing the trenches and actually standing in the trenches.”

Organized by the Air Cadets’ 142 Mimico Determination Squadron, the trip was designed with a specific emphasis on educational, cultural and citizenship experiences.

One of the highlights of the trip for Scannell was visiting the Canadian National Vimy Memorial so close to the 100th anniversary of the Battle of Vimy Ridge from April 9 to April 12, 1917.

Once there, she said, the officers held a special ceremony to present promotions and medals to the cadets — many of whom are around the same age as the fallen soldiers commemorated at the memorial.

“That people their own age made such a sacrifice that had such a significance in history, it made a huge impact on them,” she said.

“It was really humbling, especially at the cemeteries with all those crosses lined up for miles. The cadets saw first-hand how many young people gave their lives so we could be free.”

Among those cadets recognized during the special Vimy ceremony was Chief Petty Officer 2nd Class Benjamin, who received her five-year service medal.

The whole experience, she said, was a “huge thing” she won’t soon forget.

“The Battle of Vimy Ridge was something that had been so impressed upon me growing up — learning about how it was the first time all the Canadian divisions had come together to win and kind of put Canada on the map,” she said.

“So, actually seeing Vimy was something that was really important to me — and the fact that I received my service medal while I was there made it even more worth it.”

To see more photos and read cadet diaries from the trip, go to www.exercisecanadianinvasion.ca.

For more information about the cadet program, go to www.cadets.ca or www.navyleague.ca.
Cynthia Reason
by Cynthia Reason
Cynthia Reason is a news reporter for the Etobicoke Guardian. She can be reached at creason@toronto.com. Follow her on Twitter @icreason and Toronto.com on Facebook.