HURRICANE
Today was a very packed day. In the morning, after we woke up and had breakfast, we went downtown and saw the “real” London for the first time. After taking some pictures at the Arch we got on to the tour bus and took a little trip through the heart of London and managed to see the majesty of the city first hand and so close up. It did not matter where our bus would turn, every few metres we would listen to information on famous sites. We passed through many famous places including Trafalgar Square, Oxford Circus and even some I had never even heard of such as Harley Street – home to some of the world’s most famous medical achievements.
During the tour, the differences between the architectures of the two major (divisions?) of London, which were the modern architectural design of the city of London with it’s strange and fantastical shaped skyscrapers. In comparison to the ancient style of Westminster with its beautiful cathedrals and other castle-like buildings. The division was most visible when we crossed the bridge. We also visited the H.M.S. Belfast that was stationed at the shores of the Thames and visited the boiler and engine room that were so big that they appeared like mazes to me.
Finally, to the final portion of the day, we visited the Museum of Science that held a lot of interesting history on World War I as well as the history of aviation and human attempts at flying throughout the ages. The museum (V&A?), which was basically an art museum filled with priceless architecture from all over the world. We unfortunately did not get to go the Natural History Museum. At the end we had dinner at Garfunkles before returning to our rooms at RAF Northolt.
-LS Millan

HURRICANE
Today was an amazing day and definitely the best yet. We started off on the right foot, finally getting formed up in a timely manner in the morning, ready for breakfast at the Jr. Mess. We made it quick and were lined up to receive lunches aft eating while also being instructed and then introduced to the new mascot, Mr. Big (Zootopia). We all headed down for our first ride on the tube, eventually arriving at the Marble Arch (for lots of group pictures!!!) There we hopped on a double decker tour bus to see London and go through the streets. The amazing views and beautiful architecture were described by a recording and accompanied by terrible instrumental church music. We eventually got of and walked to HMS Belfast for a tour of the boat. Yang jumped so high at the sounds from the gun deck video. We walked down to the engine and boiler rooms, and I was astounded by the tangle and maze of pipes and tubes. Then we went for lunch on the side of a wall. We all gathered together after lunch and jumped on tube to head to the museums! Our Flight went to the Science Museum first and it was really cool! And then we went to the V&A but didn’t get to stay for long because it was closing so we stayed outside for an awesome photoshoot. 🙂 Then we went for dinner at Garfunkel’s and headed back to the barracks.
-LAC Murgel

SPITFIRE
Today was very interesting. First we woke up and ate breakfast, so the usual stuff but then we went to the underground transit system of London called the “Tube”. Having a large number of cadets and Officers, it was difficult to manage and all get into one car, but I have successfully become a master at “hugging the wall”. I was disappointed when the wall did not hug me back. We went deep into the city and we visited museums. We visited Victoria and Albert Museum and the National History Museum and the HMS Belfast. While we visited the HMS Belfast, I experienced a unique experience as the other Air Cadets in my Flight asked a variety of questions on the subject of boats. My favourite was the question “What’s the difference between a ship and a boat?”.
-Gleb Allik

SPITFIRE
Today was a very busy day. We started off with breakfast as always and then we headed off to the “tube” a.k.a. the Underground. We took pictures under the marble bridge and then viewed downtown London on the double-decker bus.
-Cpl Nampijja, M

HALIFAX
Today was a great day. Everyone was doing what was asked of them and things went fairly smoothly. The weather was chilly but manageable. The first thing we did was the Hop-on Hop-off bus tour. It taught us some history about London and showed us what London looked like. The second thing we did was seeing the Water Ferry. It was very interesting, we got to see the boiler room, Captain’s chamber and so on. On shore and on the ferry you could see London Bridge. Next we walked to the museums. I got to see the Science Museum and the V&A Museum. They were both very fun to look through. Once we were done with looking in the museums, we walked to a restaurant called Garfunkels. Burgers and friends were served. When dinner was finished, we traveled back to the barracks. Overall, it was an amazing day and I can’t wait for what’s to come next.
-Emily Simoes

HALIFAX
Today was great! We went out of the base all day. It started with the “Underground”. We took a bus tour where we learned about the buildings that we will be touring later on in the trip. We stopped at HMS Belfast, she was a beauty. We got to explore the ship and had a blast pretending to be the Captain. Then we got back on the bus and my Flight went to the Science Museum. The Science Museum was very cool and had cool technology. Then we switched over to the V&A where we took lots of photos with the realistic statues. After the museums we walked to Garfunkels and got filled up with tasty burgers. For the last adventure of the day, we got a bit lost in the Underground but ended up back at the blocks where cadets are ready for bed.
-Cdt PO2 Sweeny

MARCH 13
BLENHEIM
Today was a good day. Everyone was listening to their orders. Today we have visited Ruislip Gardens Statin for the first time. We also went on a bus tour that drove around London. We went to the Water Ferry, London Bridge, City Pier, V&A Museum, Science Museum and Natural History Museum. Today was sunny and not that cold.
Cadet Sergeant Terechtchenko 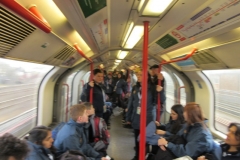 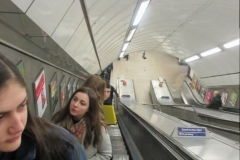 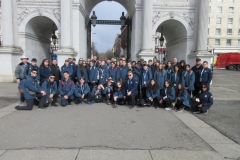 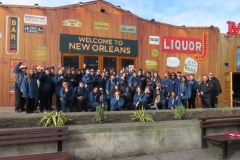 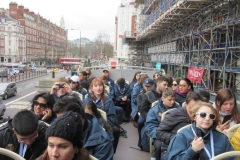 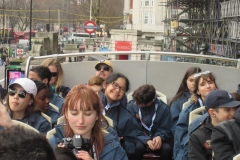 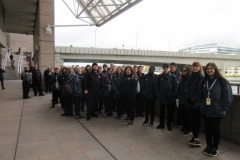 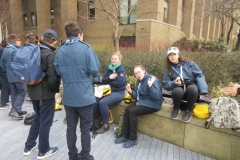 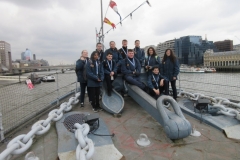 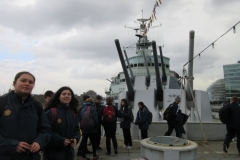 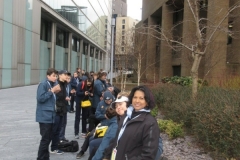 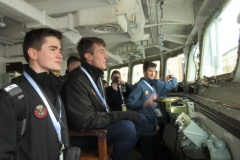 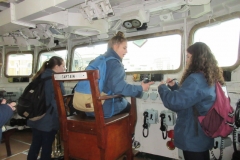 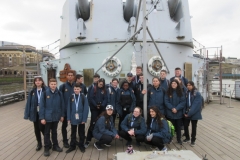 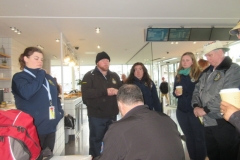 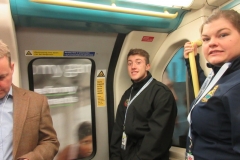 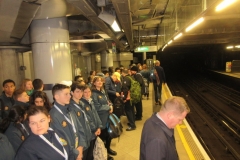 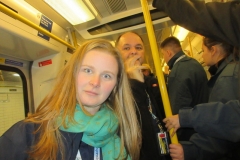 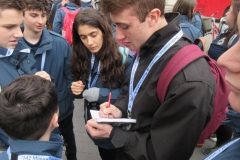 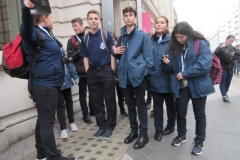