We’re all very exhausted. After a full day of jam-packed fun activities, we all are desperate for a good night’s sleep. Being officially the first full day in France, Europe, we started all excited and woke up early to enjoy the European morning Sky.

We started our journey with a visit to the Bayeux Tapestry. A delicate ancient piece of art, the tapestry tells us the fascinating stories and tales of Harold and William and their conflicts. We were provided with English explanations of each of the scenes of the tapestry, which were divided into 5 sections. Following the tour, we were given time to waste some money at the gift shop and explore the accompanying museum.

Along with the Tapestry museum, we also visited the Bayeux Normandy Battle Museum, which included items and equipment from D-Day. We got to see the guns and uniforms soldiers wore during WWII, something special that we wouldn’t be able to see elsewhere.

Having given free-time to shop and eat around the Bayeux Cathedral. We set off to Ste. Mer

e Eglise. We explored how a soldier played dead after his parachute landing failed traumatically. He spent nearly 2 hours on the top of the church, overseeing the chaos underneath him. After visiting the Airborne Museum, we went to dinner at the Pizzaria near the outskirts of town.

With a few changes to our plan, we headed straight back to UCMNT, leaving a few hours to work on our uniforms and enjoy a few moments of peace.

Today we started the day off with breakfast, which as cereal, bread and a drink to go with it. After breakfast we went for a walk approximately half an hour. We got on the bus for 2 museums. We did some souvenir shopping in the museums too. It was fun. Later on we had free time to explore the town that we are staying in and also did more souvenir shopping. After that we went to a different town to a memorial and did one last souvenir stop for the day. Then again we had more free time to discover the other town. Then got on the bus and travelled to a restaurant. Once we were done eating we looked at some old boats then got on our bus and road back home.

Today we went to the Bayeux Tapestry, the Normandy Memorial Musee and the Airborne Museum in Sainte Mere-Eglise. When we went to the Bayeux Tapestry we got phone-like receivers that explained the story of William the Conquer that was stitched on a 7m tapestry; I really enjoyed this as my dad always told me this story and today I learned it in full. Then we walked single file to the Normandy Memorial Musee and learned about war heroes, divisions of troop’s placements and about weapons during that battle for example: Eisenhower, MXDII pistol and how Canada only had 2 divisions of air force. After that we travelled to the Airborne Museum and we saw some things like a C-17 that tailed a glider during WW2. Soon after, we had free time to shop and my “buddy” and I found a warehouse army surplus store and I bought a 101 regiment airborne ring.

Today was our first full day with routine in France. First we went to see the Bayeux Tapestry. I enjoyed being able to walk and listen and see the story of the tapestry all at the same time. I was perplexed as to how long the tapestry is. I twas more than 70 meters long. The people who embroidered the whole thing must have been very, very patient. Next we went on a walk to the museum of the Battle of Normandy. In there, I read about each sides point of view and strategies going into and driving the battle. After this we got some free time. My flight stuck together as we explored. One of my favourite places to see was inside the Notre Dame. It was interesting to see how big it was and certain aspects, such as the different pices of stained glass. This was also when we ate our lunc

hes and went into the little shops. After this, we went to the Airborne Museum. Here we got to explore three different areas. In the first and third ones I enjoyed looking at the different weapons, medals and uniforms used, awarded and worn during the battles. The second one had different interactive exhibits. Although I was a little afraid to go all the way up to see the top of a plane we did. Later on we went out for dinner, where we ate pizza and pasta. It was an eventful day, where I got to bond with my entire flight.

Today was the first day that we had to wake up on time.  I hated this because of the time change and that was the first night of sleep since the trip started.  We went to breakfast.  After breakfast we went to the first museum of the day.  We went to Bayeux Tapestry.  It was cool. We walked around listening to a pre-recorded tour. We then went to Musee Memorial de Normandy. We went shopping.  I didn’t buy anything so I just had lunch. We went to the bus and went to the airborne museum.  I liked this museum the most and took a lot of pictures.  We went to dinner.  It was good.  On the bus ride back I wrote this.  When I got back I will fix up my uniform for tomorrow.

Right after the tapestry and the long group walks we headed to the airborne museum.  This museum had three buildings.

When I first went through the main door I thought we were still moving a long way into the museum.  Well, I was wrong.  In the museum we saw what the weapons and uniforms that the soldiers wore and looked like.  Today we also saw a dummy of one particular soldier whose parachute got caught halfway down the tip of the church and stayed there for two hours during the battle.  Today there is an old torn parachute and a dummy to honour not only the soldier but all of the soldiers who fought and died in battle. 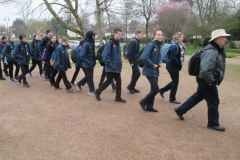 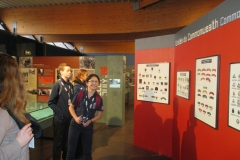 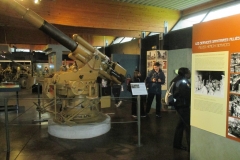 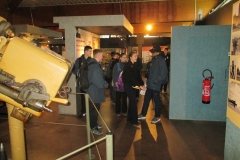 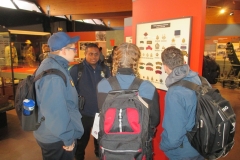 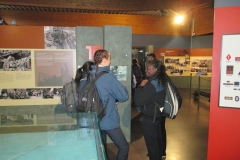 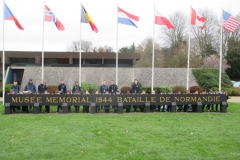 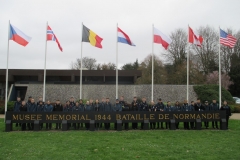 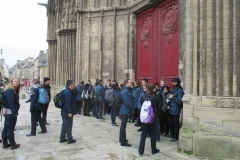 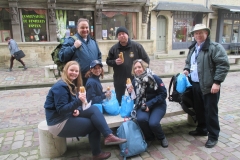 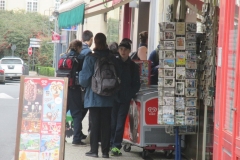 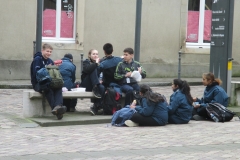 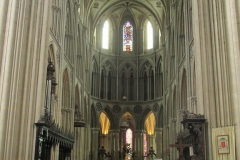 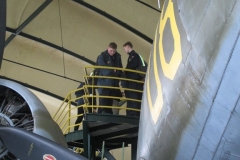 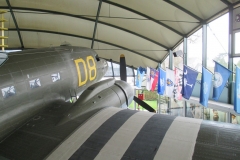 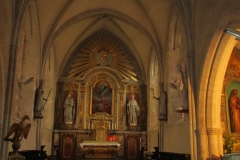 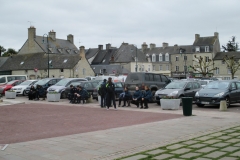 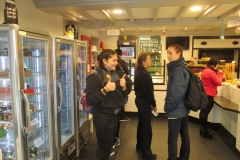 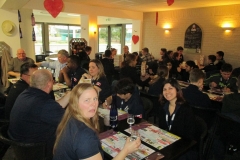 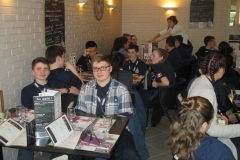