Today was a very interesting, informative and pretty fun day!

First, we got to sleep in for an extra half hour, which was great because it meant there was less people sleeping on the bus.

Today we went to several cool places.  The first place we went was l’Abbaye Ardennes, an abbey that was heavily bombed during the Second World War.  There were also quite a few Canadian soldiers executed by German soldiers.  While we were there we also found a geocache.  It was very fun looking for it around the abbey.

After that we went to the Musee Memorial de Caen (the Memorial Museum of Caen) where we saw an exhibit about before, during and after WWII.  We also saw a short video about the battle of D-Day and Normandy.  After that we went on a tour to several places with at tour guide from the Museum and learned more about the history of the war and the battles along the Normandy coast.  We went to Arromaches-des-Bains, the American Cemetery in Omaha, where we saw the Tap Ceremony to lower the flag.  I found one of the three Canadian graves in this cemetery.  We also saw the many memorial sculptures and monuments dedicated to the fallen.  Finally, we went to Pointe du Hoc where we climbed down into craters, German pillboxes and machine gun holes.

Overall I thought is was a very interesting and fun filled day!

In the morning we went to a place where we found a geo-bug treasure thingy!  It was co cool!!  A geo-bug/treasure is a type of “treasure” that people hide all across the world.  They are harder in random locations and people try to find them!  After that, we went to a museum.  The museum talked a lot about Hitler.  The stories were pretty sad but I thought that the overall museum was pretty interesting.  After that, we had a tour around France.  We went to different war related sites.  They were pretty cool….and cold.  Today was really interesting and I learned a lot of stuff.

We started the day off 30 minutes later than usual.  Finally had croissants this morning which was very delicious.  Our first destination was an area where an execution took place.  We found a geo-spot here and took some things as well as well as leaving something for someone else to discover.  Next, we went to the Caen Museum and took a guided tour there, and later at the various beaches along the coast.  All of the gun emplacements are there and nice to look at.  Overall, I enjoyed my day and look forward to seeing where we go next.

We started today by visiting the Chemin de l’Abbaye d’Ardennes, where we remembered those who were killed at the hands of the SS.  Then we travelled to the Musee Memorial de Caen where we learned more about D-Day and Caen.  We had a bagged lunch and after that we toured the Normandy coast and visited several prominent historical sites.

Today I was one of the Duty Junior NCO’s so I had to wake up the Cadets in the morning.  Also, I had to wake up 10 minutes earlier than everyone.  We went to the Abbaye d’Ardenne and walked around the various sites there.   We then went to the Caen Museum and watched a movie about the war.  It was interesting.  We had lunch at the museum and then took a five hour bus tour going to the American Cemetery at Omaha Beach and Arromaches-des-Bains.

We woke up today at 6:30 (that’s an extra half our of sleep!) to finish packing and prepare for the eventful day ahead.  We were awarded the “daily” trophy yesterday, which had to go back today, but I’m confident that my Flight will win it again.  Our first location was Chemin de l’Abbaye d’Ardenne, where a horse penned in next to the coach was a point of interest, in addition to the Abbey and Memorial Garden.  After touring the area, we were given an opportunity to find a geo-cache with a hint of “along the pines or under something”.  My partner, CPO2 Benjamin was leaving no stone unturned, and both she and I found it.  The next location was the Caen Memorial Museum where we learned French history from 1918 onwards and met many French students who were there on a school trip.  I realized how easy it is to understand their casual conversation and how hard it is to speak to them without a translator.  The guided bus tour was really interesting.  We saw an artificial harbour an American Cemetery and Memorial, Omaha Beach, and Pointe du Hoc  By the end of the tour the weather had gone from warm, clear day with a temperature of 18 to a foggy and windy day.  Overall it was a good day.

This morning we went to an abbey.  At the abbey we went geocaching.  After that we went to a memorial museum and watched a movie.  Finally, we went on a coach tour of historic sites.  Tomorrow I am looking forward to staying in a castle.  Yesterday we played a group of Italians in fooseball.

Yesterday and this morning I was the Junior NCO Duty Officer.  It was a wonderful experience.  I woke up and hour before all the other Cadets, as I was supposed to wake up everyone on time, which I did.  With all the wonderful sites to see I gained a lots of knowledge throughout this trip.  Today we went to museums, cemeteries and amazing tours.  Mario, our tour guide, was amazing.  He was a very experienced and informative tour guide.  Overall it was a great day. 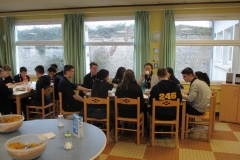 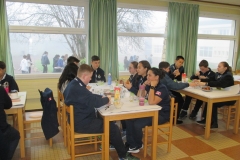 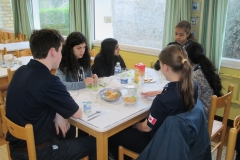 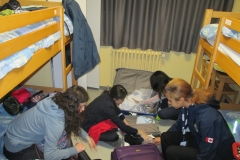 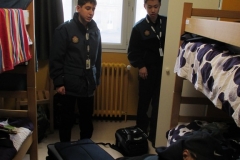 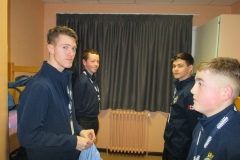 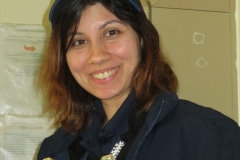 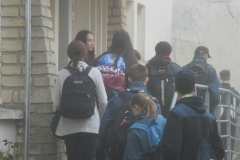 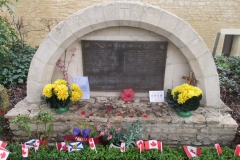 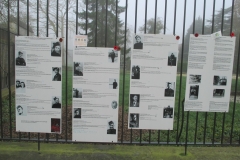 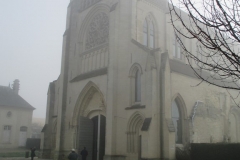 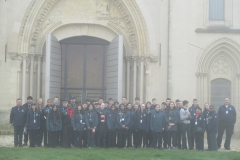 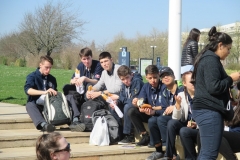 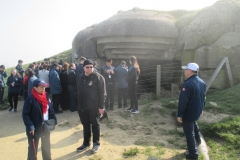 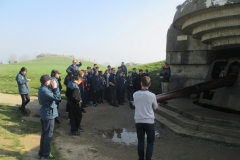 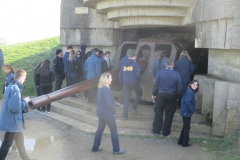 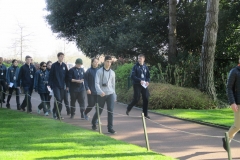 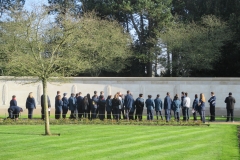 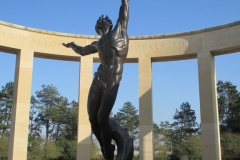