Baguettes for millennia have been symbols of status and wealth.  It is a good sign that London still acknowledges this fact and blesses us with 84p Bagettes at Tesco.  Yesterday, we had our Baguette ceremony where WO2 Morrison and I cracked open a fresh Baguette and devoured it.  I had pleasant dream that night and I was disappointed when they were interrupted today at 6:00 am by my good friend PO2 Sweeney.  The day was pretty average until we got to breakfast.  At Breakfast, the chef was running late (due to snow) and we didn’t have hot food for the first 15 minutes.  I love omelets.  We proceeded to go to the subway for one of the last times to go to the British Museum.  There I was interested mainly in bones, but other stuff was good too, I guess…

After that, we went back to the barracks and started cleaning up and fixing our uniforms.  We ate dinner and it was delicious.  We proceeded to wait for the British Cadets.  When they did arrive we ate a number of snacks and talked to them about their life in London as Cadets.  We discussed the topics such as British food and tradition, slang, laws and my favorite, difference in prices relative to minimum wage.  Did you know that the minimum wage in the UK is £3.50 / hour?  That’s nuts!  After that we went back, finished packing and had a chill time.  In conclusion, I love Baguettes.

Today was a less than average day.  We started off with the usual wakeup call at 6:00 am followed by an aching pain in my hip.  I came to London to get away from Canada but clearly a little bit of Canada had to come along with us (aka the snow).  The chef came late today.  I’m pretty sure its because he/she couldn’t handle a cm of snow.  Instead of the usual cheese & butter sandwich for lunch, I was happy to find a ham & cheese sandwich.  We got on our long trip to the museum on what would be our 2nd last time in the underground.  We explored the museum in our little groups and saw a lot of interesting things.  My favourite of them all was the African exhibit.  We finished off and headed back to RAF Northolt on our last trip in the underground.  We had an hour to clean and prepare our uniforms before we went to dinner and the reception.  I was surprised when I had finished packing my suitcase in 10 minutes, which was half the time it took me when packing to come here.  I had fun at the reception talking to my friends and the British Cadets.  Anyway, we cam back and finished with everything we didn’t do and after bothering PO2 Allik about getting me this log book for a good couple of hours, I’m finally writing this.  Since I’m waking up at 4:00 am, I should go to bed now.

p.s. sorry about my writing for whoever has to read this.

It was a bitter sweet day.  We woke up, dragged ourselves out of our beautiful bets and went for breakfast. Then we took the underground 17 stops to the British Museum.  There was some really cool stuff in the museum like pieces of Chinese wall carvings which the British Empire stole.  The museum was great, but as any good history should, it got a little boring seeing the same stuff, so my group headed to the cafeteria and chatted for the last official day.  After that we took the underground for the last time.  Then we cleaned and packed for 2 hours.  During this time we also changed into our uniforms.  After we finished up, we went for some dinner on the base and then to a reception which we hosted.  In this reception we got to meet the British Air Cadets who were amazing and had the best accents.  They told us all about their life in London and thought we were weird when we said we drive on the right.  In all it was a good last day and I’m going to miss this trip and the people in it.

6:00 woke up, brushed my teeth, washed my face, did my hair etc.  10:00 entered the British Museum.  We took a tour, me, Mr. Sweeney and Malagala until 14:15 where we exit to go back and clean our rooms and back our bags.  We then ate dinner at 18:00 where we had rice and meet and we got to meet some British cadets.  It was a good day.

Today is the last day!  In the morning, we went to the mess to get breakfast and then went to the British Museum.  Before we packed and cleaned our rooms, we needed to get our uniforms ready for our dinner and to meet the British Cadets at the reception.  It was interesting to learn about how their squadron ran.  After that we went back to packing our bags toget ready to leave the next morning.

Today was a really fun day!  We woke up early as normal and after breakfast we went to the British Museum.  There we saw so many cool artifacts and learned a lot about other places.  One of the coolest things I saw was the Rosetta Stone.  It was so big and I learned that it was used to decipher another language.  I found that it was a great place to learn about history.  After the museum we took the tube back to the station near the base.  It’s sad to know that this may be my last time on the tube, it was a good train ride however.  The moment we got back, we started cleaning our rooms and doing our uniforms.  Thankfully my uniform wasn’t too bad so it was easy to do.  We went to dinner in the mess hall and it was so delicious!  The pasta made my mouth water and the donuts for dessert were drizzled in chocolate and had fine sugar sprinkled on it!  It was the final day to spend with our flights and it was nice to just sit, eat and laugh.  After that we had the reception and met the British Cadets!  They were quite friendly and very funny.  It was a good night but it was very sad to leave.  Once we got back to the place we were living, it was hectic as everyone was packing their bags and making sure it wasn’t overweight.  Overall this was a very relaxed but progressive day.  It’s sad to see we’re leaving tomorrow but it was a good day.  ☺

Today was either the most stressful day or for most people the best, because it is the LAST day.  So I was on duty today meaning that I had to wake up before everyone else in the early morning so I could wake everyone else.  I woke up at 5:00, shockingly in a good mood because I knew today was going to be very intense.  I got all the cadets up and ready officially by 5:30.  Things went smoothly except for hiccups with the vacuum.  I ended up stress cleaning and vacuuming the halls as told (perks of being on duty).  Whilst the cadets waited for me and waited outside in the cold (SORRY), I vacuumed everything.  I finally got outside and we all hopped on the coach bus until our first destination, the Mess Hall.  At the mess, I had to run out of the bus and grab a freezing tray of “exotic” bagged lunches and then ran back.  I finally arrived at the bus huffing and puffing after 4 trips with my fellow duty cadets and we made our way to the airport.  Once we arrived we got our kit together and realized we only had 45 minutes to get to our flight (great, more stress, LOL) we ran to security (not losing anyone) faster than The Flash and ran through our gate.  WE MADE IT ON TIME!  Everyone was surprised including me and I still am.  Lastly and the only thing that kind of sucks is I’m going to get NO sleep on this flight, also I’m going to miss the memories I made with my friends that are now family. 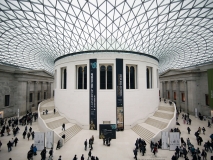 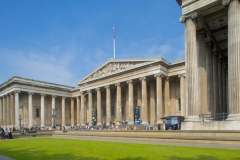 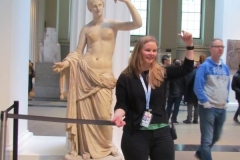 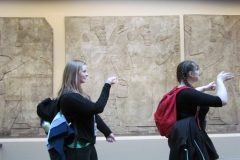 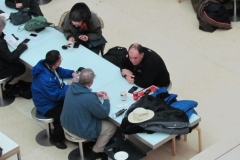 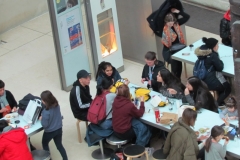 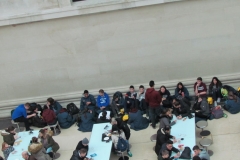 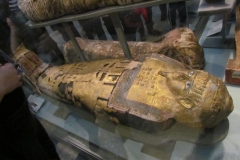 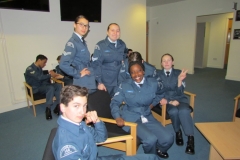 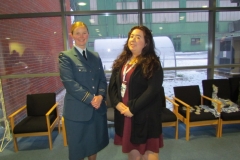 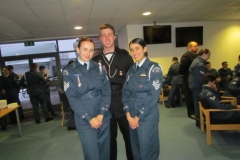 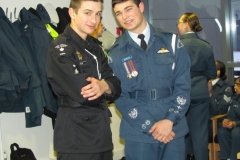 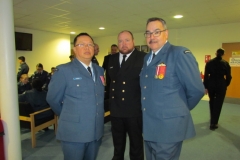 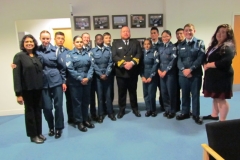 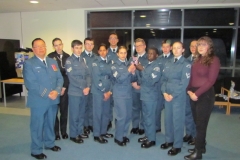 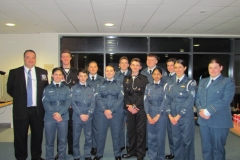 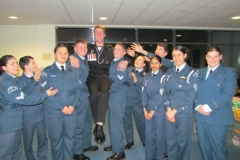 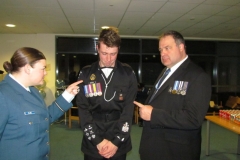 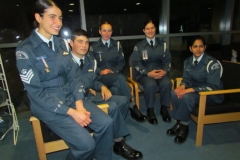 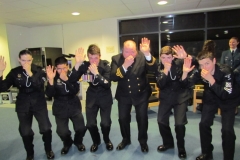