Day 2 of our Europe trip we visited Juno Beach. This beach was different from the other beaches I have been to. Most beaches have a shore line where the waves crash on. Juno Beach didn’t have a certain line where the sand and water meet. It was more puddles of water that were scattered throughout the area

Juno Beach is a location where many historical events occurred. This is where the Germans attacked the soldiers. It’s hard to imagine that such a breath-taking view could have such a horrific past. We captured many wonderful pictures of the land that will make this trip even more memorable.

March 13th, we landed in France. After we had lunch and went to our rooms to unpack and settle in. We then had to eat dinner before w

e were on our way to Juno Beach. Juno Beach was so pretty and quiet. After that we came back and headed back to our rooms.

Have you ever flown to another timezone? If not, it sucks. Like a lot. I personally got up at 8 am the day before and went to bed at 11pm the next day (other than a quick 2 hour nap on the bus). That’s like 38 hours straight of awakeness. I als

o noticed that without sleep people seemed a bit crazier. For example, some people took a 2 hour “beauty rest” on the bus and actually woke up looking worse. Anyway, we finally go

t to the town of “Berniers-sur-Mer” and parked the bus (somehow). We unpacked our luggage of the bus and carried it to the place where we would be sleeping for the next 6 days. After unpacking and stuff we went down to Juno Beach, which goes out for about 1.5kms. We walked about 500 meters out before being forced back to the concrete walkway by seaweed and weird snake things.

We went to the memorial for D-Day and headed back to the lodge with Italian kids. They were okay except they played loud Rihanna music at night time *grumble*. Anyway, that’s about all my tired, half dead brain can remember about yesterday.

Bonjour tout le monde! Today we woke up after our first night at UNCMT and had some wonderful breakfast. We then proceeded to the museum of Bayeux tapestry and after that walked to a museum detailing parks to WW2. After that, we got some free time for lunch. We then went to a separate museum focused on the aviation aspect of WW2 and got some more free time for fun. We then went to an Italian restaurant and as I write this, we are driving back to UNCMT to prepare our uniforms for tomorrow.

After the nerve wrecking but incredibly fun airplane and somewhat long bus ride to our residence, we enjoyed a nice lunch, thereafter heading to an evening walk. We walked along the neighbouring streets and down to Juno Beach. When one thinks of beach they think of one with a lot of sand and water tides running to the shore and everything else that makes a beach, a beach. They cannot imagine that Juno Beach is in fact very different and very unique. Well, besides the fact that it is where the soldiers always landed and were attacked by the Germans, it has very little water, most of which is in puddles. The two monuments by Juno Beach are also very touristic. A lot of pictures were taken and we headed for a nice familiar dinner. I was particularly fascinated by the fact that there was a very large scape of land without the water and wit was the beach. Of course my fascination led to the question, “Where is the water?” not knowing that Captain Vivares was standing right next to me. He answered “well, because it is the low tides” very sarcastically, and this made my day.

So Day 1 of Canadian Invasion.  After some tearful goodbyes the parents headed out with the Cadets remained.  An hour later, after successfully going through security checks and finding our boarding gate, the Cadets went on a massive scavenger hunt in the terminal for sole cheap restaurant – Tim Hortons.  After lining up for what seemed like hours for a cold chicken salad sandwich, we walked back to the gate to get ready for boarding.  Getting seated on the plane went quite a bit more smoothly than I thought it would and after a few short delays, we finally took off and headed for Paris.

Throughout the flight we received one and a half meals, one hot and a slice of banana bread.  While the food had us begging for MRE’s, (what can you expect of airplane food), the onboard entertainment system did manage to entertain us throughout the flight with movies like Moana and Dr. Strange, and games like hangman and trivia.  After successfully surviving the long flight, we smoothly switched from sleeping on the plane to sleeping on the coach bus headed towards UNCMT, where we will be staying for the next couple of days.  We took a evening stroll to Juno Beach and I felt like a celebrity after the amount of photos the officers took of us.  We went back to our rooms and slept.

Yesterday, we arrived at France. It all seems like such a dream! Anyways, I’m getting ahead of myself. This amazing story all started off with the plane ride.  I spent most of the time on the plane playing games and sleeping. Near the end of the flight, I looked outside and the view was soooo nice!  The sky was purple ad the clouds were pink! After we unboarded the plane, we stepped outside and you may not believe e but the grass was DEFINITELY greener! After we got to out homes and ate dinner, we went to Juno Beach. During the sunset, the view was really pretty.  The water was also at low tide so we could walk farther down the beach.  Down by the beach I found a couple of really pretty shells!  After that, we went to back to eat supper! Just so you know, in France, “dinner” is “lunch” and “supper” is “dinner”.  After that, I went to sleep.  Today was a fantastic day.

Really interesting plane ride was fun and the movies were good. Could’ve been more fun with my phone.  Juno Beach was a very nice photo-op, and we all ended up doing a fun photo that so the sun went down.  Food was good and the chicken and fries were amazing.  Didn’t appreciate getting up at 6am, but its cadets and so its expected.

Today we started off with a great breakfast and a very early morning.  Then we boarded the coach, and made our way to the Bayeux.  We walked to the Bayeux Tapestry and learned about Edward, Harold, and William.  I really enjoyed the tapestry as we got to listen to an audio book explaining the story of it all, which made it really easy to understand.  It was also really beautiful with all the different colours, and it was awesome to see how they expressed their stories without writing them, thousands of years ago.  After exploring the gift shop we walked to Musee Memorial Bataille de Normandy.  In it there was a lot of tanks, guns, uniforms, and old supplies from the soldiers.  We were given free time within a given area and were allowed to explore and shop within our groups.

My group explored the beautiful streets and ate some delicious pastries and crapes.  My favorite part of free time was going inside the 0ld church.  It is thousands of years old, and is huge.  The architecture of the church was amazing and the stained glass was stunning.  We then took the coach to the American airborne museum.  What I found cool about that was the fact that it was located where a monument was burned down during the war.  And, across from the museum was the church where a paratrooper got caught and was hanging from the side for two hours during the battle until he was taken down and made a prisoner by the Germans.  There is now a dummy representing the paratrooper hanging from the steeple.  We then had more free time and then had at a good dinner at a pizza restaurant. 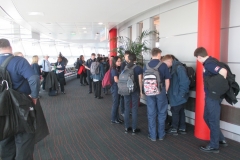 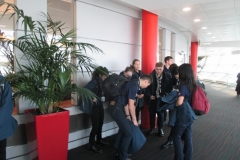 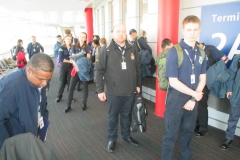 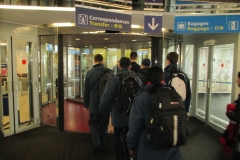 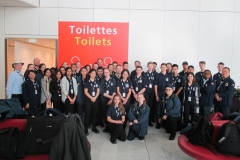 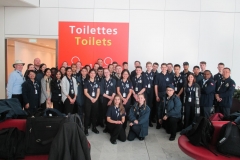 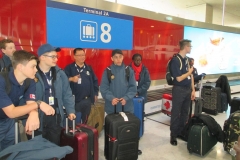 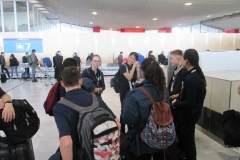 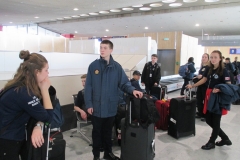 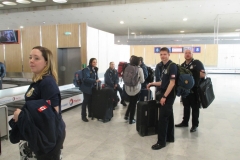 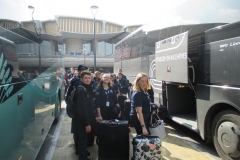 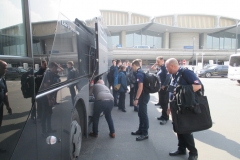 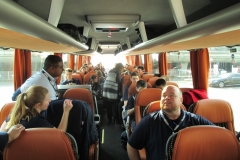 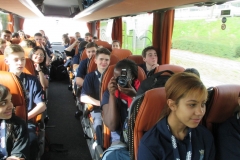 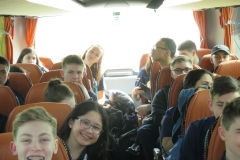 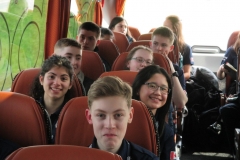 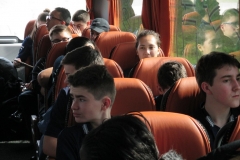 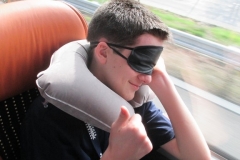 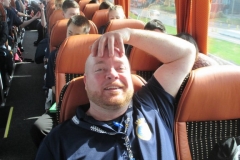